THIS PAGE IS UNDER CONSTRUCTION - MORE INFO COMING SOON!
If you wish to register an interest by email, we will inform you when the page is complete.

Antarctica is perhaps the ultimate destination for any traveller. An uninhabited continent of more than 12 million sq kms, this is the least known and least explored place on earth. Virtually the entire continent is south of the Antarctic Circle, and it forms the coldest, driest, highest and windiest land mass on our planet. With no permanent human residents, and no evidence of any pre-historic indigenous population, Antarctica is an unspoilt gem; a silent, frozen land under clear unpolluted skies. The inhospitable scenery has a grandeur unlike anywhere else; a stark, silent and frozen tableau of towering mountains, ice-bound headlands, vast panoramic landscapes and colossal icebergs. A wilderness which must be seen to be believed.

This Antarctic Peninsula and South Shetland Islands cruise delivers you into a landscape of dark rugged rock, pure white snow, and a fantastic variety of wildlife.

We cruise on the MV Hondius, an ice-strengthened vessel ideal for this voyage. Our friendly and experienced international expedition staff and crew will be anxious to share their knowledge and enthusiasm, as we navigate through pack-ice and narrow waterways. Our itinerary will be flexible, paying close attention to weather and ice, changing course and using inflatable zodiacs amongst the ice-floes, spending as much time ashore as possible. 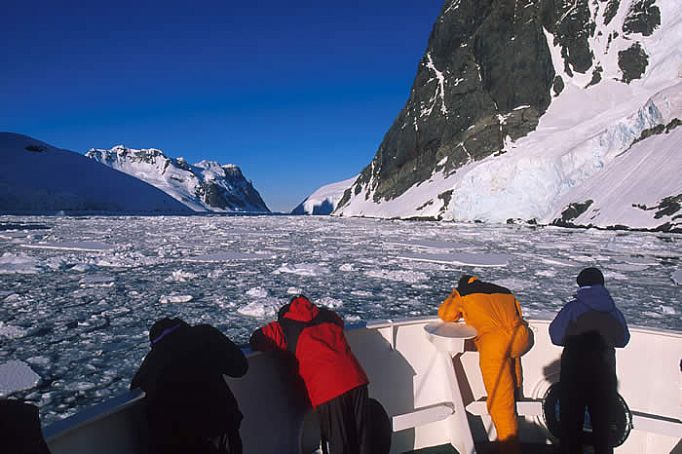 Day 2: Sat 3 December - Ushuaia
Arrive at Buenos Aires early-morning and transfer onward to Ushuaia, the world’s southernmost large settlement, found on the barren shores of the island of Tierra del Fuego. This is a wild, windswept place, and whilst bird numbers are lower at this southern latitude, the quality is undeniable.

Depending on time of arrival, the afternoon is free to explore the town or begin birding. At the harbour front, and on nearby ponds you may see Kelp and Dolphin Gull, Upland and Kelp Goose, Fuegian Steamer Duck and South American Tern. Chimanga Caracara are overhead, and you may also see Southern Lapwing, Magellanic and Blackish Oystercatcher, Red Shoveler, Night Heron and Chilean Skua. The first Southern Giant Petrel and Great Grebe may be seen at sea, and landbirds include Austral Thrush, House Wren, Austral Negrito, Chilean Swallow, Black-chinned Siskin and Rufous-collared Sparrow.

Day 3: Sun 4 December - End of the world, start of a journey
A further opportunity to relax and recover from our long flight, with good birding on the shore of the Beagle Channel, in the shadow of the Andes. We board Hondius in the afternoon, and sail the mountain-fringed Beagle Channel for the remainder of the evening.

Days 4 & 5: Mon 5 & Tue 6 December - Path of the polar explorers
Over the next two days on the Drake Passage, you enjoy some of the same experiences encountered by the great polar explorers who first charted these regions: cool salt breezes, rolling seas, maybe even a Fin Whale spouting up sea spray. After passing the Antarctic Convergence – Antarctica’s natural boundary, formed when north-flowing cold waters collide with warmer sub-Antarctic seas – you are in the circum-Antarctic upwelling zone. Not only does the marine life change, the avian life changes too. Wandering Albatross, Grey-headed Albatross, Black-browed Albatross, Light-mantled Sooty Albatross, Cape Pigeon, Southern Fulmar, Wilson’s Storm-petrel, Blue Petrel and Antarctic Petrel are a few of the birds you might see.

Sites you may visit include:

Danco Island – Activities here may focus on Gentoo Penguin nesting on the island, in addition to Weddell and Crabeater Seals that can be found nearby.

Neko Harbour – An epic landscape of mammoth glaciers and endless wind-carved snow, Neko Harbour offers opportunities for a Zodiac cruise and landing that afford the closest views of the surrounding alpine peaks.

Paradise Bay – You may be able to take a Zodiac cruise in these sprawling, ice-flecked waters, where there’s a good chance you’ll encounter Humpback and Minke Whales.

Port Lockroy – After sailing through the Neumayer Channel, you may get a chance to visit the former British research station – now a museum and post office – of Port Lockroy on Goudier Island. You may also be able to partake in activities around Jougla Point, meeting Gentoo Penguins and Blue-eyed Shags.

Day 11: Mon 12 December - Scenes of South Shetland
The volcanic islands of the South Shetlands are windswept and often cloaked in mist, but they do offer subtle pleasures: There’s a wide variety of flora (mosses, lichens, flowering grasses) and birds, including Gentoo and Chinstrap Penguins and Southern Giant Petrel). In Deception Island, the ship plunges through Neptune’s Bellows and into the flooded caldera. Here you find hot springs, an abandoned whaling station, and thousands of Cape Petrel, along with Kelp Gull, Brown and South Polar Skua, and Antarctic Tern. A good hike is a possibility in this fascinating and desolate volcanic landscape.

As an alternative, you may be able to engage in activities near Half Moon Island. Here Chinstrap Penguin and Weddell Seals often haul out onto the beach near Cámara Base, an Argentine scientific research station. Conditions on the Drake Passage determine the exact time of departure.

Days 12 & 13: Tue 13 & Wed 14 December - Familiar seas, familiar friends
Your return voyage is far from lonely. While crossing the Drake, you’re again greeted by the vast array of seabirds remembered from the passage south. But they seem a little more familiar to you now, and you to them.

Day 14: Thur 15 December - here and back again
We arrive in the morning at Ushuaia and disembark. We fly home to London via Buenos Aires, arriving back in the UK on Day 15:

Accommodation: is in comfortable cabins with en-suite facilities. See full details here. All hotel accommodation is included on the basis of shared rooms, please ask for detail of single supplement in Ushuaia.
Food: food on board is very good European cuisine, with a choice for all courses. Breakfast and lunch are usually an extensive buffet. There is a well stocked Bar run by the crew's Hotel staff, who are efficient, courteous and very helpful.
Mobility/Walking: is generally light/moderate, and an average level of fitness is required. There are no lifts on MV Hondius, though if you are mobile enough to manage stairs, you should be able to enjoy all aspects of this holiday. Staff are patient and courteous, and assistance is provided at both ends of zodiac voyages, all of which are optional. Land conditions can be wet and slippery, with uphill and downhill gradients, though an option to engage in very little walking when ashore is usually available. When on land all participants will be under the management of the Expedition Leader and their team, and must take note of instructions which are there for your safety and benefit.
Weather: will be cold, though can be surprisingly warm and pleasant. we travel in late spring/early summer, though of course at this latitude bad weather is quite possible. Warm clothing is essential, though your large vessel offers more than adequate cover and heating. Daytime temperatures can be around 5 - 6'C .
Insects: biting insects are not expected, though there will be flies on the boggy landscape. Little other insect life is expected.
Group size: you will part of a ship's complement of approx 100 clients. There is no restriction to how many of these will be Heatherlea clients.
Flights: from London Heathrow are included. Local flights can be arranged from any airport linked to Heathrow. We will of course be happy to make personal arrangements for your convenience.
Photography: Opportunities are good to excellent, particularly for birdlife including Penguins, seals and above all scenery.

Your leaders: Dave Pullan and Kevin Shaw are the nominated Heatherlea Leaders, Kevin joining with ten or more clients. The voyage will be under the supervision a resident on-board Expedition Leader, plus crew leaders of a very high standard.

Our Vessel - MV Hondius
MV Hondius is the first-registered Polar Class 6 vessel in the world, meeting the latest and highest demands for ice-strengthened cruise vessels. Hondius also exceeds the requirements of the Polar Code as adopted by the International Maritime Organization (IMO), allowing you to enjoy the polar regions as much as possible while impacting them as little as possible. It will be the most flexible, advanced, innovative ice-strengthened vessel active within the polar regions, being optimized for exploratory voyages. Hondius offers high quality accommodation for all passengers in a variety of spacious suites and porthole cabins. Additionally, one deck consists of a large observation lounge and separate lecture room, which are reserved for a wide variety of interactive workshops, exhibitions, and performances to involve yourself in as and when you wish.

Our captain will aim to keep sea time as short as possible to focus on fast, effective access to shore and near-shore activities. Wildlife of the region may be observed both from land and sea and to give you the maximum contact with nature and the wildlife you have travelled so far to see, there is a tough fleet of rigid-hull inflatable Zodiac boats to guarantee swift and safe landing operations for all passengers at the same time. Hondius has two separate gangways and a sheltered indoor Zodiac embarkation platform that can also be used for special outdoor activities. Flexibility will be key as your Leader aims to make the most of our opportunities in the hope of seeing as much as possible. Hondius is equipped with advanced stabilizers and two main engines capable of powering the vessel up to 15 knots. You will have 72 crew and staff members (including expedition and hotel staff) at your service while on board, ensuring that what time is spent aboard is comfortable and enjoyable.

More ship and cabin information can be found here

Kevin Shaw owns and runs Heatherlea with wife Caryl, and has 30 years experience of wildlife tours worldwide. Pictured (right) with Ian Ford in the Arctic in 2019, Kevin will join this tour with ten or more Heatherlea clients. 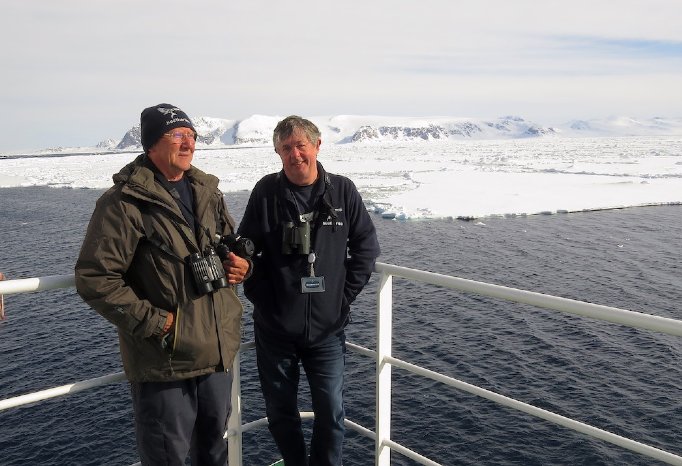 Other birding and wildlife holidays in Antarctica

Why choose Heatherlea for your birding and wildlife holiday?