Birding and Big Game including Serengeti and Ngorongoro Crater

Tanzania is known for its vast wilderness and protected areas. This new tour takes you to some of the world's most iconic wildlife destinations as we follow a fascinating route filled with a good array of habitats and specialist species including many endemic birds and key African mammals.

Perhaps the two most famous locations are the plains of Serengeti National Park, a safari mecca populated by the “big five” game (elephant, lion, leopard, buffalo, rhino), and the majestic Ngorongoro Crater, one of the wonders of Africa, and a 'must visit' location. We should also enjoy (good weather permitting) views across to Mt Kilimanjaro, Africa’s highest mountain.

Other key locations include Lake Manyara, a pristine soda lake in the Rift Valley where a range of wetland species may be encountered, and we also go to Tarangire National Park, a superb, largely unexplored location renowned for its high density of Elephants and Baobab trees. You can look forward to excellent birding with a sizeable list, plentiful herds of wild animals and many memorable wildlife encounters on this rewarding and enjoyable holiday.

Day 1: Wednesday 26 April 2023- London Heathrow - Arusha
After relaxing in our complimentary VIP Airport Lounge, we fly via a European hub to Arusha in eastern Tanzania. Located at the base of volcanic Mt. Meru, this city is the gateway to the best safari destinations and to Africa's highest peak, 5,895m Mt. Kilimanjaro, lying some 100 kilometers northeast. We meet our local guide and head to our hotel (distance 50 km, 50 mins). Depending on arrival time, we may do some birding enroute to the hotel, and/or on arrival. Overnight in Arusha at Planet Lodge Hotel.

Later we continue to Tarangire, where excellent birding awaits. As we travel we will see Baobab trees, which enrich our journey. These magical trees have huge significance in the African culture, fable having it they were planted upside down. We may make a stop by the roadside to try the famous “Baobab tree hug”. On the way we may see new birds including Banded Parisoma, Hildebrandt’s Starling, Black Bishop, Two-banded Courser, endemic Yellow-collared Lovebird and near-endemic Rufous-tailed Weaver. Travel distance 140 km (2.5 hrs) We stay at an excellent tented camp, which we anticipate could be a favourite place for many! Overnight for two nights in Tarangire at Burunge Lodge.

Day 4: Saturday 29 April - Lake Manyara
We drive to Lake Manyara, a pristine soda lake in the Rift Valley. We take a back road that enables us to enter this great habitat soon after leaving our hotel, and after around one hour we arrive at Lake Manyara to a spectacle of birds awaiting us. There are many Greater and Lesser Flamingos in the soda waters, and other birds include Grey-olive Greenbul, Crowned Eagle, Purple-crested Turaco, Crested Guineafowl, Bare-faced Go-away-bird, Blue-capped Cordon-bleu, Grey Kestrel, Martial Eagle, Yellow-billed Stork, Silvery-cheeked Hornbill, Abyssinian Scimitarbill, Slate-coloured Boubou, Goliath Heron, Superb Starling, Hildebrandt’s Starling and Great White Pelican. Local game is mainly composed of monkeys, though we might also see Savannah Elephants, the famous 'tree-climbing Lions' and much more.  Overnight in Karatu at Bougainvillea Safari Lodge.

Day 5: Sunday 30 April- Ngorongo Highlands and Crater
Today we visit the magical Ngorongoro Crater, immediately to the south of the Serengeti, and an amazing place, packed with wildlife. Ngorongoro is a large and scenic crater about 600m deep, located at about 2000m above sea level, with amazing views both from the top and inside. A truly unique location, the crater is nestled in a pristine natural forest, full of beautiful indigenous trees, and boasts incredible views. We begin birdwatching in the high forest around it's rim, and we might expect Hunter’s Cisticola, Golden-winged Sunbird, Eastern Double-collared Sunbird, Black-fronted Bush-Shrike, Bar-throated Apalis, Cinnamon Bracken Warbler, Brown Woodland Warbler, Southern Citril, Thick-billed Seedeater, Brown Parisoma, African Olive Pigeon, Brown-backed Woodpecker, Waller’s Starling, White-naped Raven, White-headed Barbet and Schalow’s Turaco.

Next we enter the majestic Ngorongoro Crater itself, rightly known as one of the wonders of Africa. Descending down to the crater floor takes us through great scenery, and we take note of the local Euphorbia tree varieties. Herds of wild animals are plentiful, and we watch for Lion, Cheetah, Savannah Elephant, Black Rhino, Golden Jackal (now called African Golden Wolf), Common Zebra, assorted gazelles, Nile Hippo and Wildebeest. Birds include Hildebrandt’s Francolin, Shelley’s Francolin, Grey Crowned Crane, Fan-tailed Widowbird, Pectoral-patch Cisticola, Lynes’s Cisticola, Pied Avocet, Yellow-throated Sandgrouse, Black-bellied Bustard, Kori Bustard, Secretarybird, Rosy-breasted Longclaw, Flappet Lark, Lesser Flamingo, Greater Flamingo, Chestnut-banded Plover and Rufous-tailed Weaver. We spend most of the day birding and enjoying game drives in the crater. Later in the afternoon, we ascend back to the crater’s rim, enjoying some more highland forest birds as we move higher. Travel is around 20 km, and we stay overnight at Rhino Lodge, Ngorongoro Crater.

Day 8: Wednesday 3 May - Serengeti NP to Arusha
Today we drive from Serengeti across the Ngorongoro Conservation Area on our way back to Arusha. Birding will be active all day, and we hope to also enjoy some good big game. Roadside birds likely include Chestnut-bellied Sandgrouse, African Penduline Tit, Taita Fiscal, Southern Grosbeak Canary, Red-throated Tit, Short-tailed Lark, Black Bishop, Two-banded Courser and much more. Travel around 250 km (4.5 hrs). Overnight once more in Arusha at Planet Lodge Hotel.

Day 9: Thursday 4 May - Departure
We enjoy breakfast at the hotel, before our airport transfer and international flights home, arriving in the morning of Day 10: Friday 5 May.

Accommodation is in excellent, friendy lodges and hotels. Rooms are comfortable, clean and attractive with en-suite bathrooms. Details via links on the 'Itinerary' page.
Food is usually plentiful. Breakfasts offer a good choice, with tea, coffee, juice, fruits, eggs of your choice and other options. Lunches are taken at hotels or in the bush depending on the day’s plan. Evening meals are at the accommodation with a full dinner. Vegetarian and other diets are available.
Walking is easy though restricted in the national parks. This is no hindrance, as we will be safe and able to get up very close to many animals and birds.
Travel is by comfortable Landcruiser-type vehicles, with open-top roofs. These are the best vehicles for this environment, smaller minivans are no more than adequate, and though you will see many of these, the larger vehicles are much better in our opinion. All clients have a window seat. Tarmac roads make travelling much easier these days, though there are rough and dusty roads en-route. Roads around National Parks are unmade, though we travel slowly here to maximise our chances of birding and game.
Weather will be warm to hot most days although it can sometimes be cool, especially in the early mornings. You will probably experience 'dry heat', though rain is certainly possible on some days, and can benefit our wildlife watching!
Insects There are few biting insects at this time of year, but precautions are advised. Before travelling consult your doctor about suitable anti-malarial medication, and on arrival take adequate precautions against mosquito bites although you may not encounter mosquitos.
Clothing We recommend a mixture of light and warm clothing as temperatures will vary from place to place. Gloves and hat are advised. Please bring waterproof clothing, it hopefully won't be needed but rain is possible at any time.

Pete Cosgrove
Pete is a highly experienced leader and very well-travelled overseas birder, with an interest in Africa and Kenya/Tanzania in particular. Pete will be accompanied by experienced local driver/guide(s) on this tour.

Free Field Guide!   'The Birds of Eastern Africa' by Ber van Perlo is included in your holiday price. One copy per room booked. 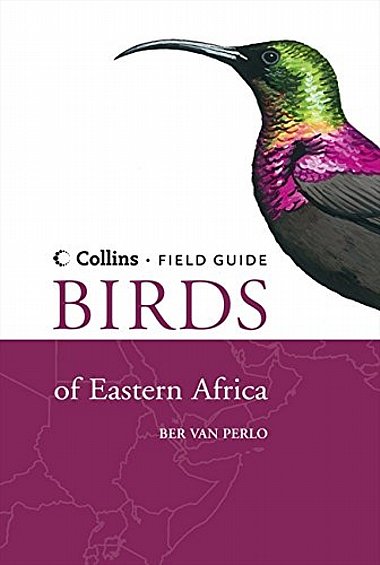