Raptors, Bustards and more at one of Spain's premier birding destinations

The Extremadura region of Spain is rightfully one of the most famous birding destinations on the Iberian Peninsula. Brimming with fantastic birdwatching almost everywhere you look, many of Europe’s rarest and most endangered species take advantage of the mild winter climate, making Extremadura an ideal location.

Home to the largest concentration of wintering Common Crane anywhere in the world, large flocks of these elegant birds will be a highlight. Filling almost every corner of the rice fields by day, the ‘buggling’ calls from birds as they come and go from their roost sites can be equally impressive. A range of other species occur alongside the crane flocks, and we look for wintering wildfowl and waders around wetter areas and large flocks of larks and finches in drier arable land. Such an abundance of birdlife attracts raptors including Hen Harrier and Short-eared Owl, and Black-shouldered Kite is a special target. In more rocky terrains such as those within the much famed Monfrague National Park, we scan the skies for Griffon and Black Vulture, Spanish Imperial and Bonelli’s Eagle. Blue Rock Thrush, Black Wheatear and Rock Bunting may be seen here too, whilst around rivers and reed-fringed lakes we look for Purple Swamphen and Little Bittern.

The Spanish steppe is another great habitat, where special birds include Great and Little Bustard, which can form sizeable feeding flocks in winter. The same is true of Pin-tailed and Black-bellied Sandgrouse, and finding these species can be easier at this time of year when flocks are larger and the grass shorter! Large gatherings of Calandra Lark and Spanish Sparrow may also be present in the steppe, while Hoopoe and Iberian Grey Shrike can occur just about anywhere.

Based at one centre, the holiday is designed to run at a leisurely pace combining short to medium length walks with birdwatching from our vehicles. While birding and target species remain the priority, we plan to take in some history and culture too, after all, we will be staying in a former stately home less than ten minutes from Caceres Old Town, a UNESCO World Heritage site. Winter in Extremadura is full of rewarding birding, and this exciting new holiday is ideal, both for those who have visited before or newcomers. With fewer tourists than in spring, it can often seem as though we have the whole of the countryside and its fabulous birdlife to ourselves!

Day 1: Sun 4 December 2022                         Arrive Spain and first birding
We fly to Seville, collect our vehicles and head to Caceres in the heart of Extremadura. The grounds surrounding our hotel are abundant with birdlife, and once settled we spend a few hours exploring, with a walk around them. The small colony of White Stork will be evident, and we anticipate excellent views. Hoopoe and Iberian Magpie may also feature on our first afternoon, and it is always worth keeping one eye on the skies for Griffon or Black Vulture soaring overhead. We stay overnight at Hotel Las Arenals for six nights.

Day 2: Mon 5 December                                                The Caceres Steppes
Stretching out from the city in all directions, the extensive grasslands play host to some of the most sought-after bird species in Extremadura. Though declining globally, both Great and Little Bustard are both well represented here, and we investigate known hotspots to search for them. Black-bellied and Pin-tailed Sandgrouse form winter flocks in the steppe, and with the help of shorter grass, this duo are often easier to locate than at other times of the year! Lapwing and Golden Plover are likely to be conspicuous and passerine flocks may yield our first Calandra and Crested Lark, Spanish Sparrow and Corn Bunting. A favoured habitat for hunting Hen Harrier, Merlin and Short-eared Owl, also likely are Kestrel and Little Owl which favour the ruined buildings with Hoopoe and Iberian Grey Shrike in quiet, scrubby corners.

Day 3: Tue 6 December - Monfague National Park
Perhaps the best-known birding destination in Extremadura, and for good reason with such an abundance of birdlife! Officially designated a special protection area by the European Union in 1988, the park contains a real mixture of habitats including Mediterranean forest, Cork Oak woodlands and imposing rocky crags. An excellent place for raptors, Monfrague supports a large resident population of Griffon and Black Vulture, not to mention a good number of Golden, Bonelli’s and Spanish Imperial Eagle. Smaller raptors such as Peregrine, Sparrowhawk and Red Kite are frequently seen, and if lucky elusive Northern Goshawk too. Dedicating the entire day to exploring the National Park, we include visits to a series of high-altitude viewpoints, giving us every chance of a great raptor day, with Rock Bunting, Blue Rock Thrush and Sardinian Warbler likely too.

Day 4: Wed 7 December - Montanchez
Today we head to Montachez, the highest village in Extremadura. Founded by the Romans in the first century AD but captured by the Moor in 713 when its imposing castle, which still stands today, was first built. In the afternoon we can explore the ancient building which doubles up as a good raptor vantage point and in some winters is home to a few Alpine Accentor. Our morning will be spent birding in the enchanting chestnut woodlands, on the lookout for birds including Lesser Spotted Woodpecker, Hawfinch, Short-toed Treecreeper, Firecrest and Serin. A nearby wetland site can support a number of wildfowl and waders, perhaps including Pintail, Little Stint, Greenshank and Spotted Redshank and if time allows, we stop here for a look around on our way back to Caceres.

Day 5: Thur 8 December - Southern Caceres
The rice fields to the south of the city are important wintering grounds for tens of thousands of Common Crane, and we do our best to obtain good views of these elegant birds. Other species of interest include Skylark, Corn Bunting, Linnet and Goldfinch, which form large flocks sometimes containing Chaffinch and Brambling. Introduced yet colourful Red Avadavat and Common Waxbill are both widespread in the rice fields, and Merlin spend their time terrorising the flocks while Iberian Grey Shrike watch on from the bushes. We hope to find Black-shouldered Kite, a beautiful raptor often more active at cooler times of day such as at dusk or when overcast. Small pools and wetlands can attract wildfowl and waders such as Pintail, Little Stint and Kentish Plover especially after hard weather elsewhere in Iberia.

Day 6: Fri 9 December - Merida and surroundings
Also to our south is Merida, Extremadura’s capital city, whose suburbs can offer surprisingly good birding! En route we pause at a lake surrounded by rocky crags and though wildfowl and gulls are likely, our main targets are mountain dwellers including Blue Rock Thrush and Black Wheatear. We also search for Thekla Lark and Dartford Warbler in scrubby areas. Reaching the capital we head for the banks of the Guadiana River, taking lunch here and a walk across the largest standing Roman Bridge in Spain. Black-crowned Night Heron, Little Bittern, Purple Heron, Glossy Ibis, Little and Cattle Egret are possible, while adjacent urban parkland holds Hoopoe, Iberian Magpie and Serin.

Day 7: Sat 10 December - Return to the UK
Depending on our flight time, we revisit some of our favourite birding destinations and enjoy some of the classic Extremadura birdlife one last time. Transferring to Seville airport, we return to the UK after what is sure to have been a great week of winter birding! 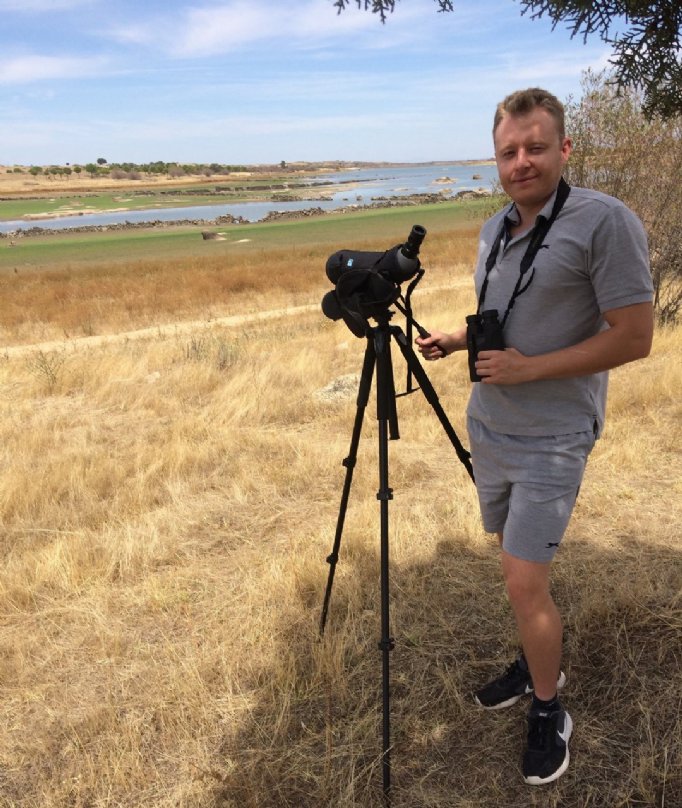 Chris is an experienced Guide who moved to Extremadura in 2016. He now spends his time carrying out research for local organisations such as SEO Birdlife and Grus, working as a wildlife guide, and of course, birdwatching! We are delighted to welcome Chris to the Heatherlea team!

Accommodation is in a comfortable hotel with all rooms en suite.
Food Breakfast is typical of Spain, consisting of a roll with jam/cheese/ham. Fruit juice and tea or coffee are also available. Evening meals are generally local dishes, which are good but often quite simple. Vegetarian and other diets are welcome.
Walking is generally light/moderate. There may be some uphill track and road walking, though generally an average level of fitness is required.
Weather Typically, temperatures will range from 5c in the early morning to perhaps 12c in the middle of the day. Sunny spells will happen occasionally, but cloud and rain are possible. Colder weather is rare but possible.
Insects biting insects may be encountered, though not usually a problem in winter. A good repellent is advised just in case.
Group size is restricted to 12 clients maximum.
Flights are by scheduled airline, from London. We may be able to offer flight arrangements from another airport and/or or quote without flights so you can make your own arrangements. If you wish to add an extension either before or after your holiday, please contact us and we will be happy to arrange this for you.