This is a combined birding and mammal trip, with a special focus on seeing endangered Iberian Lynx in the wild. We think this itinerary is one of the best available for this beautiful yet elusive cat, as it includes two classic Spanish destinations, giving you more opportunities to see the animals than alternative itineraries based solely in Andujar. In our second centre, where Lynx are the main target, we now have access to a private estate where the animals are at their highest density in Spain. This is crucially important to maximise your chances as the animals continue to decline.

You also have the advantage of excellent birding in both places, including many Spanish resident speciality birds, and absorbing birding in pleasant weather is a very enjoyable part of this holiday. Birding in the excellent marismas of Coto Donana, and in Sierra de Andujar, part of the larger Sierra Morena Natural Park, is exceptional.

Join us in two great destinations, for a full week of great wildlife watching during the (usually!) mild winter of southern Spain.

Iberian Lynx (Lynx pardinus) stands on the brink of extinction, and is perhaps the most endangered wild cat in the world, with only around 200 individuals remaining. Just a century ago, it ranged over half of the Iberian peninsula. As recently as the mid-nineties it was thought to occur in a wide area of south-west Spain. Today its range has shrunk dramatically to just two viable populations within Andalucia, and on this holiday we visit both, with an estimated 15 – 20 individuals in Donana, the rest being in Sierra Morena. Finding this elusive cat is becoming ever more difficult, though Heatherlea have an excellent record. January is the ideal time to see Lynx, active during the cool daytime as animals seek a mate, before warmer months when they become more nocturnal.

The first part of the holiday concentrates largely on birding, with slight chances of Lynx. From our base in Coto Donana, we will explore the mosaic of marshes, pine woodland, open heathland and sand dunes at one of the best times to visit. This famous area can be very dry later in the year, but in winter its marshes usually hold water and attract great numbers of gulls, waders and other shorebirds, including  flamingos, herons, egrets, White Stork, Black Stork, Glossy Ibis and Spoonbill. Thousands of wintering geese feed in the shallow waters, and we also have the opportunity to catch up with some of southern Spain's specialities, in particular Purple Gallinule, Marbled Teal, Red-knobbed Coot and rare Spanish Imperial Eagle. Some breeding raptors are back on territory, whilst others are passing on migration, and the whole area is just full of life. We have chances of seeing Iberian Lynx, and other large mammals include Wild Boar, Red Deer, and Fallow Deer.

The second part of our holiday is spent in Sierra de Andújar. This beautiful mountain chain holds dense populations of Red and Fallow Deer, Moufflon, Otter, and Wild Boar, as well as the largest remaining Lynx population in Spain. Birds seen here should include Griffon and Black Vultures, Spanish Imperial Eagle, Azure-winged Magpie, and Black Wheatear.

We have taken great care in this itinerary to give you the best possible chances of seeing Lynx. Our days are exciting, with excellent birding and mammal watching in a pleasant climate. Our rural hotels give you the chance to experience real Spain, and we hope you will enjoy our special meals and Andalusian local wines. This is a relaxed holiday, with very little walking.

Days 1 – 4: Sat 7 Jan - Tue 10 Jan 2023 - Doñana National Park
After relaxing in our complimentary VIP Airport Lounge, we fly from Gatwick to Malaga. We drive to Coto de Donana, perhaps with a detour to see White-headed Duck, then passing through the fertile farmland and fruit groves west of the Guadalquivir River.

The Marshes by El Rocío and the varied habitats of El Rocina teem with birds – Spoonbills, herons and egrets fly over the reed beds as Marsh Harrier quarter the vegetation. In shallow water, Greater Flamingo and White Stork feed, surrounded by wintering waders. The unique village of El Rocío lies at the edge of the Parque National de Doñana, and this “Wild West” town, with its white buildings and church, makes an amazing backdrop. Here we are likely to encounter horsemen cantering through the wide, sandy streets, or a mule and cart tied up to the hitching rails outside the houses. Thousands of Greylag Geese and Common Cranes graze fresh grass, while a few wintering Whiskered Tern may hawk over open water, swooping down to the surface to pick off a small insect or tiny fish. In the more wooded areas, Serin and Azure-Winged Magpies seem never to stop looking for food. Purple Gallinule can often be seen and Little Grebes occasionally take a brief swim across to another patch of reeds. A large number of wintering duck include Shoveler, Pintail and of course Marbled Teal.

Days 4 – 7: Tue 10 Jan - Fri 13 Jan - Sierra Morena Nature Park
A tremendous contrast, as we head east for a four night stay in the Sierra Morena. To give the best chances of a Lynx sighting, we must spend time scanning from a number of scenic viewpoints. From each we overlook vast tracts of Lynx habitat, and chairs will be provided, as we may have to be patient to see the animals! Here sightings of Lynx are often at long range, or can be quite close at hand. Patience is required to find these beautiful animals. In 2018, we will use the tracks in Los Lobos, a private estate where Lynx are perhaps at their greatest density in Spain. We have to pay extra for this access, but we consider it worthwhile, as we can search for the animals in quiet places away from the crowds looking for Lynx at public viewpoints, though we will do plenty of this too! The scenery in the dehesa, formed by huge rock boulders and extensive scrubland is magnificent, and birdlife is rich, with excellent chances of Spanish Imperial Eagle, Black Vulture, Griffon Vulture, Golden Eagle, Sardinian Warbler, the Spanish race of Green Woodpecker, Hawfinch, Firecrest and Eagle Owl. Our accommodation here is a guest house situated in the heart of beautiful dehesa woodland. All rooms have en suite facilities.

Accommodation is in comfortable rural hotels with all rooms en suite.
Food Breakfast is typical of Spain, consisting of a roll with jam and cheese. Fruit juice and tea or coffee is also available. Picnic lunches will include a variety of local produce plus soft drinks. Evening meals are generally local dishes, which are very good but sometimes simple. Food is usually plentiful. Vegetarian and other diets are welcome.
Walking The holiday is not strenuous. Walking is generally easy, on paths and tracks. Most birding is done close to our vehicle, and even on the longest walks we are never far from the minibuses, should anyone wish to go back.
Weather Typically, temperatures will range from -4 to 8ºC in the early morning to perhaps 10-20ºC in the “heat” of the day. Sunshine should be plentiful, but wind, clouds, rain or even snow are possible. Cold weather, with temperatures as low as -10ºC, are rare but possible.
Insects biting insects are not expected.
Group size is restricted to 12 clients maximum.
Flights are by scheduled airline, from London Gatwick. We may be able to offer flight arrangements from another airport and/or or quote without flights so you can make your own arrangements. If you wish to add an extension either before or after your holiday, please contact us and we will be happy to arrange this for you.

Dave Pullan:
Dave is a renowned birder and much sought-after tour Leader, with vast experience in Scotland and worldwide including throughout Spain. Dave has successfully led this tour several times, and is looking forward to returning!

Sergi Sales:
Sergi is a leading Catalan ornithologist with more than 25 years experience in the field, well known throughout his native Spain as one of the country's best birders. Sergi is a major asset on our tour, his encyclopaedic knowledge enhanced by his vast access to up-to-the-minute news. With his gentle manner and non-stop commitment to birding, Sergi is one of the best local birders and leaders we have met! 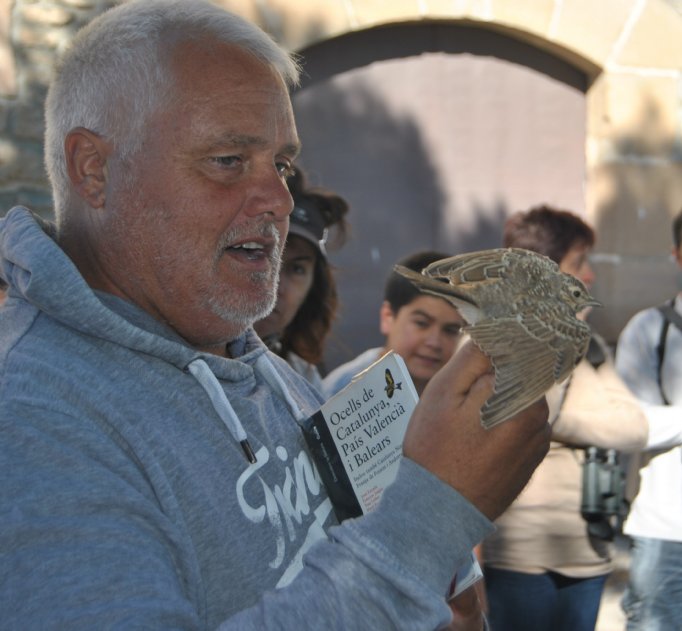