Georgia lies on the Eastern Black Sea coast, between Turkey and Russia, and along the Southern slopes of the Greater Caucasus Mountains, which form the conventional border between Europe and Asia. A country of exceptional beauty, with ancient history and traditions, special hospitality, unique architecture, food and folklore, Georgia is an attractive and hospitable destination, and one of the fastest growing birding destinations in the region.

We travel at the beginning of the northerly migration season, and many passerines and raptors can be expected in key hotspots such as broad Tergi valley, and we should find a good representation of eastern European species.

The tour is timed carefully so you may continue with your Leader to our Armenia holiday immediately afterwards, should you wish.

Day 2: Tue 19 April 2022 – Anuanuri Forest and Terek River Valley
Upon arrival, and after time to freshen up, we meet our local guide and drive north towards the Greater Caucasus Mountains. Our first birding will be at nearby Ananuri Forest, (approximately an hour from the airport) where mixed woodland beside the Zhinvali Reservoir will be buzzing with birdsong. The morning chorus from Nightingale, Redstart, Tree Pipit and a range of warblers will be a great start, while Semi-collared and Red-breasted Flycatcher, and newly arrived Green Warbler are key targets here. Continuing as the former military road winds more steeply into the hills to Gudauri, we expect our first upland specialists, including Alpine and Red-billed Chough, Ring Ouzel, Black Redstart and Alpine Accentor before reaching Stepantsminda by the afternoon.

Once settled into our comfortable hotel, we have some time to explore the surroundings of the town and adjacent Terek River Valley. Here, vegetation dominated by dense Sea Buckthorn is the favoured habitat of Güldenstädt’s Redstart and Great Rosefinch. These are two key targets of the mountainous Kazbegi region, easier to encounter at this time of year when they occur at lower altitudes and in small concentrations before relocating to higher ground to breed. Shore Lark, Rock Bunting, Water and Red-throated Pipit, (Caucasian) Twite, Barred Warbler and a few raptors may also be encountered before the day is out and we return to our hotel in Stepantsminda where we stay for three nights.

Days 3 and 4: Wed 20 and Thur 21 April 2022 – Kazbegi Region
We enjoy two full days in the mountains, allowing us more opportunities to find and appreciate some key birding targets. On one day we head out pre-breakfast to Kuro Gorge, arriving as the sun rises over the Caucasus range hoping for a memorable encounter with two specialists of the region. Here, endemic Caucasian Snowcock will be at their most vocal in the early morning, which can often prove essential in finding them. Caucasian Black Grouse is the other target, always at their most active early in the morning, when they may be found displaying on the rhododendron covered slopes.

We also visit Trusso,  and later the same day Daraiali Monastery on the border with Russia, among some of the most spectacular mountain landscapes in all of Georgia. While bird species in the mountains are more limited than other habitats, many are special, with Rufous-tailed Rock Thrush, Red-fronted Serin and stunning Wallcreeper offering unforgettable splashes of colour. On the lookout for raptors, Lammergeier, Griffon Vulture, Golden and Eastern Imperial Eagle and ‘Steppe’ Buzzard are all possible and we search for shy Mountain (Caucasian) Chiffchaff too. We visit Gergeti, to explore vibrant meadows for endemic flowers and should also encounter East Caucasian Tur, a mountain dwelling goat native to the region.

Day 5: Fri 22 April 2022 - Stepantsminda to Sighnaghi
After some final birding around Stepantsminda, we drive east stopping at Cross Pass, the highest viewpoint at Gudauri. One of the best-known areas for White-winged Snowfinch, which can be hard to find. We may see other species including Shorelark, Alpine Accentor and raptors. Returning to lower altitudes, we have options to revisit Ananuri, or instead the rich woodland at Bodorna for forest dwellers with Black Woodpecker, Red-backed Shrike, Woodlark, Dipper and Ortolan in mind. Our longest driving day, we aim to reach our hotel at Sighnaghi by mid-afternoon to rest before being invited to a traditional Georgian wine tasting to celebrate our mountain achievements. Overnight Sighnaghi for three nights.

Day 6: Sat 23 April 2022 - Taribana Plains and Chachuna Reserve
The famed Chachuna Reserve and Mta Dali Dam are our destinations today, where farmland and wide-open plains are home to an astonishing number and variety of species. We seek Rock Sparrow, Isabelline, Black-eared, Finsch's and Pied Wheatear, Black-headed Bunting, Red-backed, Lesser Grey and Woodchat Shrike, Short-toed and Lesser Short-toed Lark, Hoopoe, European Bee-eater, Roller and Rose-coloured Starling. Hunting raptors will be plentiful and perhaps include Honey Buzzard, Short-toed, Booted, Spotted and Lesser, Steppe, White-tailed and Eastern Imperial Eagle, Pallid and Montagu’s Harrier and Lesser Kestrel. We visit Mta Dali Dam, an artificial reservoir located at the base of the Iori River which acts as a supporting pool for the larger Mingechevir Water Reservoir. In a real birding paradise, and just one step away from Azerbaijan, the habitats here are attractive to semi-desert species including Black Francolin, Menetries's Warbler and more.

Day 7: Sun 24 April 2022 - Vashlovani National Park
With one of the richest biodiversities in the whole of Georgia and the Caucasus region, Vashlovani National Park offers a great variety of new habitats and some new birds. We plan to spend a significant part of the day at Pantishara Gorge, where we have good chances of seeing Chukar, Blue Rock Thrush, Western Rock Nuthatch and several species of warbler, including Eastern Olivaceous and Eastern Orphean.

Later, we drive to Eagle Canyon, one of the best and most attractive raptor viewpoints in eastern Georgia.  With tremendous views over the Alazani River Valley it is well named, hosting breeding Eastern Imperial, Spotted and Lesser Spotted, Steppe, Booted and Short-toed Eagle, as well as Peregrine, Griffon and Egyptian Vulture. Other expected raptors include Honey Buzzard, Black Kite, Steppe, Long-legged and Rough-legged Buzzard, Pallid and Montagu’s Harrier, and Black Stork and many passerines are also present in this area – a great afternoon watching the skies!

Day 8: Mon 25 April 2022 - David Gareji Monastery
Today we visit the David Gareji Monastery, an area consisting of Mediterranean-type arid land and multi-coloured clay hills covered with shrub and steppe-like vegetation. David Gareji itself is a Monastery complex built by Christian Monks in the 5th Century, which alongside being one of the most interesting sites in Georgia is also great for wildlife. Native Egyptian, Black and Griffon Vulture and Eastern Imperial Eagle are main attractions, and habitats surrounding the complex hold Blue Rock Thrush, Rock Sparrow, Calandra Lark, Eurasian Penduline Tit, Western Rock Nuthatch, Rock Bunting, Menetries’s and Eastern Orphean Warbler, Common and Siberian Stonechat and Rose-coloured Starling. Much of the day will be spent exploring the site, before we head towards Tbilisi where we stay for the next two nights.

Day 9: Tue 26 April 2022
Krüper's Wood, Krtsanisi Woodland Park and Jandari Lake
Resident Krüper's Nuthatch is very much the morning’s target, and we visit an area of mixed invasive and native pine woodland known to our guides to try and see them. Later, at Krtsanisi Woodland Park we search for woodpeckers, including Great, Middle and Lesser Spotted, Syrian, Green and Black and we may also see Golden Oriole, Hawfinch, Green Warbler and possibly Scops Owl.

Relocating to Jandari Lake, this attractive waterbody southeast of Tbilisi is surrounded by an extensive steppe landscape divided between Georgia and Azerbaijan. This is an important site for both migratory and nesting wetland species. At this time of a year we are likely to see Pygmy Cormorant, Dalmatian Pelican, Black-necked Grebe, Gull-billed, Black, White-winged and Whiskered Tern, raptors, crakes, herons, egrets and gulls, including Armenian and Slender-billed, with an outside chance of Demoiselle Crane or Citrine Wagtail too. An afternoon at Jandari will certainly provide the perfect end to this memorable tour!

Day 10: Wed 27 April 2022 – Departure
After breakfast, we travel to the airport for our flight back to the UK where our tour ends.

Accommodation is in comfortable hotels with all rooms en suite and have been specifically chosen due to their close proximity to key birding locations.
Food Breakfast is usually a buffet with boiled eggs and lots of herbs, yoghurts and cheeses, pastries and even cake! Packed lunches will be taken in the field daily. Georgian cuisine is a mix of oriental, European and Mediterranean food, and typical dishes feature fish and barbecues, and with many fresh vegetables and herbs, so vegetarians should be well catered for. Evening meals often feature live traditional music -an unexpected highlight!
Walking is generally light/moderate. There may be some uphill track and road walking in mountainous areas, and overall an average level of fitness is required.
Weather Typically, temperatures will range from 10c in the early morning to around 25c, though temperatures can be even higher in the gorges. Sunshine should be plentiful, but cloud and rain are possible. Cold weather, with temperatures as low as 5c, are rare but possible in the high mountains.
Insects biting insects may be encountered, though are not usually as a major problem. A good repellent is advised, just in case.
Group size is restricted to 12 clients maximum.
Flights are by scheduled airline, from a London airport and will be overnight and likely include a change en route. We can quote without flights should you wish to make your own arrangements or if you wish to add an extension either before or after your holiday, please contact us and we will be happy to arrange this for you.

Dave Pullan is a popular leader with Heatherlea, both in Scotland and overseas. He is top birder, with a relaxed personality, whose skills will be much appreciated in Georgia. Dave will be joined by local guides on this exciting tour. 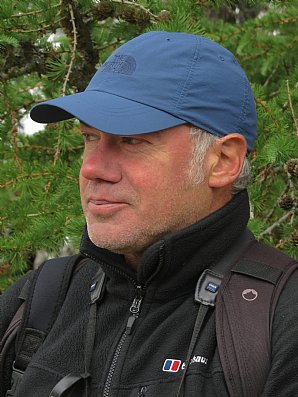