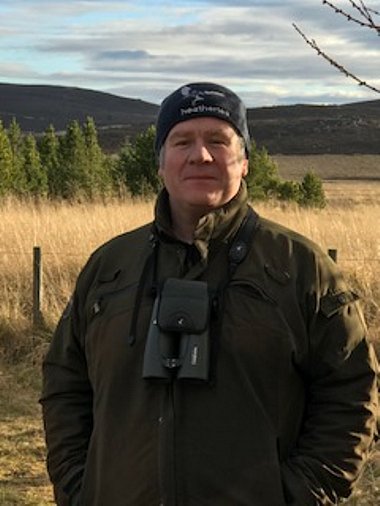 Stewart's formative years as a birder saw him regularly travel all around the UK in pursuit of rare birds, and he is still a keen and committed patch watcher, saying he is blessed to be able to hear Black Grouse lekking virtually from the back door!

Originally from Hampshire, Stewart moved to West Aberdeenshire in 2001 to continue his career in farming. He has a deep affinity for the highlands and islands and has visited many of Scotland's less well travelled corners, the Western and Northern isles being a huge draw. Having travelled widely in Europe, and with trips to the US and East and West Africa. Stewart has concluded that, on the right day, West beach, Berneray in the Outer Hebrides is the best place in the world!

A keen photographer, he’s never without an array of optics and says he feels only half dressed without his trusty Swarovskis around his neck!

Stewart feels immensely privileged to be a Heatherlea Guide and says that he gets a huge rush from showing people things they have not seen before. Guides often get asked what their favourite bird is, and Stewart's response of “Grey Wagtail” comes as a surprise, but for him, they evoke many fond memories of Hampshire chalk streams... and sewage farms across the country!